On November 11-12 2014, BusTech, a bus exhibition in the Netherlands took place in Rosmalen, a town in the south of the Netherlands. The theme of this exhibition was sustainable fuels, which was chosen following the Energy Agreement of the Dutch Social and Economic Council that was signed last year. This agreement has a very high ambition to reduce the CO2 emissions from transport by 60% in 2050 by switching over to other fuels than diesel and gasoline.

In public transport buses, this means a transition towards three new technologies: electric, bio-LNG and hydrogen. The electric bus is the most promising one as the technology is already ‘ripe’ especially if the buses are deployed for city bus service. Not only because this service requires shorter range than the regional service, but also because it can reduce the local emissions significantly which can be directly enjoyed by the inhabitants along the bus routes. Bio-LNG technology is already applied to freight vehicles, but not yet to passenger buses. While hydrogen technology is currently still far from ‘ready’. 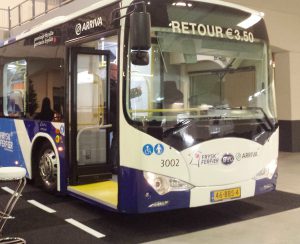 A two-day conference also took place during the exhibition. The theme of the first day was sustainable vehicle technology. While the theme of the second day, which was very interesting and attracting more visitors, was sustainable tender, where all political issues that determine the success of greening the Dutch public transport buses were discussed. 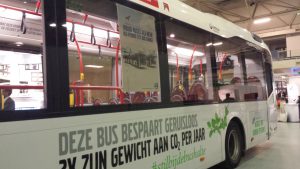 The largest challenge is to prove that the Total Cost of Ownership (TCO) of zero emission (electric) buses is lower than that of diesel buses, especially with the current facts that the oil price tends to decrease in the coming years, the range of an electric bus is far below that of a diesel bus, and that the battery lifetime is still seen as a big issue. The uncertainty of the TCO seems to be the biggest fear of the Public Transport Authorities. They cannot accept higher TCO as it might lead to higher fare that must be paid by the passengers.

The question now is: how strong is our determination to preserve the environment? The environmental benefits of electric buses are more beneficial for the public, rather than the business case of the public transport operator. Therefore, it is the task of public transport authorities to find a way to incentify the electrification of public transport. A lesson learned from other countries that have succeeded in deploying a large scale of electric buses, is that it is a matter of mentality change. We need to look more at the opportunities and not only the barriers, as barriers always come along with a new technology. When we dare to accept the barriers as risks that we need to take, zero-emission Dutch public transport would be no longer something that lies beneath the ivory tower.