Initiating sustainable mobility in Surabaya: where to start? 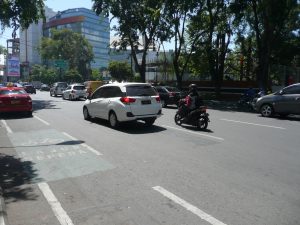 Walking along one of the main roads in the centre of Surabaya just before noon during the dry season, I experienced typical mobility problems in Asian big cities. On those nice and wide paved sidewalks, sometimes I had to correct my path as parts of the sidewalks are also used by street sellers. On both ends of the street, a white line is drawn along the road, one meter from the curb to mark the cycle paths. I did not know that that space is destined for cyclists until I saw a green marking with a white bike image on it. The marking is repeated after some hundred meters. However, no one seemed to notice it. Taxis are parked on that track. Motorcycles also use the track. Apart from the unnoticeable marking, it seems that the cycle path is unrecognizable because cyclists are absent in the traffic. I hardly saw cyclists.

As the second largest city in Indonesia after Jakarta, and with more than 2.8 million citizens, Surabaya has no proper public transport system. Public transport is currently served by public buses run by the government and mini buses run by private parties. Both are operated without timetable which makes them unreliable for passengers. Mini buses do not even have formal stops. They stop anytime and anywhere the passengers want, which causes longer travel time.

This opportunity is well taken by finance companies. With a small amount of money as down payment, people can already have a motor cycle right away. The main advantage for people is of course that they can travel anytime they want. No more wasted time waiting for buses to come and of course much shorter travel time. No wonder, the number of motor cycles in Surabaya is increasing each year. In the end of 2012, there were almost 3.5 million motorcycles in Surabaya. It means, there are more motorcycles in the city than the number of citizens. As for cars, there were more than 600,000 cars in the same period. As a result, both public transport modes are deteriorating as they cannot compete with private motor vehicles. Traffic congestion is becoming business as usual. Many experts believe that by 2018, traffic on the most main roads of Surabaya will stand still. They also believe that it is very critical to take actions immediately before Surabaya becomes like Jakarta which is nearly not liveable anymore.

In most developed countries, one will think of cycling and walking – public transport – private vehicles, when promoting sustainable mobility as the order starts from low to high investment requirements. In Asian cities like Surabaya, this concept is less relevant. The city size and the weather conditions are very challenging in promoting cycling and walking for non-recreational purposes. The effectiveness of providing proper cycling and walking infrastructure will be very low. The following order of transport investments will be more effective:

Apart from these hard measures, soft measures and structural solutions also need to be implemented, such as introduction of progressive parking fees and higher taxes for private vehicles (especially motor cycles) to slow down the growth of the number of private vehicles in Surabaya.

Do you recognise these transport problems in your city? Which measures have been implemented and what is the success rate? Please write your thought in the comment box here below. I would love to hear it from you.