Mobility management on the rise in Abu Dhabi 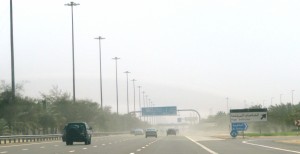 ECOMM2014, an annual meeting for mobility management practitioners and experts from all over Europe, held in Florence has ended last week. It was surprising me that one of the speakers came all the way from the Department of Transport (DoT) of Abu Dhabi to present the Transport Mobility Management which has been implemented in Abu Dhabi to realize a vision to be a world class sustainable city.

Sustainability itself is quite a new concept in Abu Dhabi. It began in 2006 when the Masdar City project was initiated with an ambition to be the first zero carbon city in the world. When I visited this twin city of Abu Dhabi in 2011, I was amazed by its large scale zero emission transport system plan which includes personal rapid transit, light rail transit and a connection to the Abu Dhabi metro system plan. However, I missed the “soft” measures which are needed to support the effectiveness of the aforementioned “hard” measures, such as how to eliminate the number of parked cars at the parking areas outside the city wall, how to increase the possibility of more people using public transport to access the Masdar City, etc.

This was also happening in Abu Dhabi who has capabilities to lay transport infrastructure in a short period of time, but unfortunately missed the soft initiatives. This resulted in a rapid growth of car ownership in Abu Dhabi with an increase of 94% average per year in the last 10 years. In 2012, the number of cars in Abu Dhabi City is almost the same as the number of inhabitants (as a comparison: in the same year in Amsterdam, a city with advanced mobility management, there is only one car for every three inhabitants and there are more bicycles than inhabitants).

Congestion is increasing in Abu Dhabi and became a wake-up call for the DoT to incorporate soft measures that are formulated as transport mobility management (TMM) started in 2012. Abu Dhabi has brought best practices of mobility management measures from many European countries that have been implementing these measures since 1986. Lessons learnt from the European experiences were adapted to Abu Dhabi’s local circumstances. This is what I always find very interesting: the issue of applicability. Two main differences between Abu Dhabi and Europe are climate and culture. In summer, the temperature can reach 48°C which makes the challenges to, for example, promote non-motorised transport modes different than those of Europe. The Islamic and Arab culture brings also its own challenge especially concerning local dress and women’s privacy concerns which lead to special needs such as women only sections in public transport vehicles.

As Abu Dhabi has no extensive cycling infrastructure network yet (being planned) and the current public transport services are only provided by bus (regional train, metro and tram network are still at the planning stage), the low-hanging fruit principle is applied by the DoT. In the period of 2012-2015, the TMM measures are targeted to large organisations such as government entities, companies and educational institutions because these groups perform their daily trips during peak hours that cause traffic congestion. Three measures are chosen: car sharing, company buses and flexible working. From all of these three initiatives, flexible working will certainly be the most challenging one. Currently, most of employees in Abu Dhabi must clock-in in the morning and clock-out at the end of the work day. When employees are free to work anytime and anywhere, it demands a mind-set change of employers from control to trust.

The challenges faced by Abu Dhabi at the moment, were faced by high-income Western European countries decades ago. Currently mobility management is already best developed in these countries. However, I personally think that it does not have to take decades for Abu Dhabi to reach the current stage of Europe. The United Arab Emirates (UAE) are known for its rapid development. In Europe, it can take about 20 years to lay a metro line from initiative to construction phase. In the UAE, it can take less than 10 years. With this advantage, combined with successful mobility management measures, it will not surprise me if Abu Dhabi can surpass the success of Europe in the next 20 years.

Do you have more examples of mobility management measures, perhaps those that are already implemented in your city? I would be grateful if you could share it with us in the comment box here below. Thank you in advance.