2015, a year of challenge in the Dutch public transport 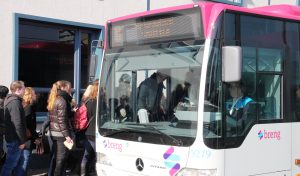 The year 2015 will be a year with challenges for the Dutch public transport sector. Occurrences that started in the last months of 2014 will start showing the implications in 2015.

The main occurrence is the discontinuance of seven city regions (Amsterdam, Rotterdam, The Hague, Utrecht, Arnhem Nijmegen, Eindhoven and Twente) that have extensive authorities in the field of traffic and transport. These regions are responsible for public transport (as Public Transport Authorities who grant public transport concessions to Public Transport Operators), regional infrastructure and traffic safety. A city region can be seen as a cooperation body between the municipalities in that region. It lies more or less between the province and municipality level.

This discontinuation means that Amsterdam City Region will become Amsterdam Metropolitan Area and Rotterdam and The Hague will merge as Rotterdam-The Hague Metropolitan Area. For the four other city regions, their tasks will be taken over by the related province. The Region of Eindhoven for example, will be taken over by the Province of North Brabant.  (not including the national government who is responsible for the national railway transport). The ultimate goal is to create a compact government (with three levels: national government, province, and municipality) that leads to efficiency.

Efficiency is certainly the keyword that triggered the discontinuance of the city regions. Not only in the sense of bureaucracy, but also decrease in the budget for public transport. In other words, less subsidies for public transport operation. This leads to what has been happening: Public Transport Authorities (PTAs) and Operators (PTOs) will focus their investment more on bus lines that give high income to the PTO, i.e. high occupancy and high frequency with high level of service, such as R-net lines. On the other hand, more and more less busy (and not profitable) bus lines in rural areas are disappearing and replaced by small scale public transport (such as neighbourhood buses run by volunteers) or demand responsive transport system.

Reducing only the not profitable lines is not enough. PTOs must also think of how to attract more passengers to generate more income in order to cope with less subsidies from the government. It is time for PTOs to bear in mind that their client is the passengers, not the PTAs.

This situation encourages PTOs to be more creative and innovative in providing services to their passengers. A simple and understandable public transport network, simplicity in payment, quick and simple transfers, are among others that can be done to compete with the comfort offered by cars.

The public transport sector will certainly be facing tough challenges in the next year, which must be answered with innovations, client-oriented services and sustainable operation.